Over the last 4 days I was an exhibitor at the Defense Services Asia show in Kuala Lumpur. The show was a great success for us and our local partner XV Asia Technology  with lots of interest from real customers with real money to spend on all of our products.

But I have to admit that the show itself was somewhat surreal. It was like a department store of weapons, armor, vehicles, and all manner of other stuff that goes boom.

I met generals, admirals, deputy ministers, police chiefs and all manner of other senior military officials. After a while it became almost mundane to see a flag officer walk by with an entourage of aides and assistants.

Rather than drone on (yes, there were lots of UAVs there too) about the show, I thought it might be more interesting to see some of the items that were being sold.

I left out some of the less impressive things like trucks, bridges, tires, barbed wire and uniforms. There were plenty of all of these items. And of course there were the major corporations selling jets, satellites, helicopters etc.

The really fun stuff was in the Malaysian exhibit area where you could buy mortars, rocket propelled grenades, tanks, missiles, and any other weapon you could imagine. Take a look.


Defending the free world from itself is a tough job, but with tools like these, it is just a little easier.

Thank goodness there are not terrorist states attending this show. Oh wait, we did have several people from Iran and Syria stop by the booth to ask about our products. We politely said that unlike some of our competitors, we as an American company honor the embargo against your countries. Sorry. We hope the missile and arms dealers at the show did the same.

The show wrapped up today which ended up being our best day. We gave demonstrations to several high ranking officials who were very impressed and wanted to see more.

I am as exhausted as I was when I arrived. Only a couple of more days of training, sales calls and strategy meetings and I am on my way home.

Could I get any more tired?

So, after a 26 hour transit from San Luis Obispo to Kuala Lumpur, then setting up all day on Sunday, I finally got to sleep after being awake for 44 hours straight. That is a record for me. I only slept for 6 hours and then we started the trade show.

The XV Asia Technology booth was packed to the gills with products, people and collateral. As a late arrival to the show, XV Asia did not get the best location, but this did not seem to matter. We had a good, steady flow of people who were all interested in virtually all of the products.

The Immersive Video Dodeka 2360 camera was a great draw and people were very interested in the fully spherical view that the system captured. It brought a lot of people to the booth. Once at our door, they almost all asked about the Global Emergency Resources eWRAP, which inevitably led to a discussion of wireless, then the challenges of moving video, which led to the MVE product based on Sentinel AVE technology and the microNVR.

As this is a military show, there were lots of weird products that I will try to capture over the next two days.

Anyway, time for dinner, then bed. Hopefully I will sleep through the night. Tomorrow we have delegations from Russia, Thailand and the Philippines coming to visit us.
Posted by Bob Ehlers at 3:31 AM 2 comments: 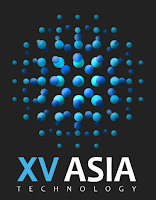 I am sitting at the Narita airport connection terminal waiting for my connection to Kuala Lumpur. What am I doing here?

Two weeks ago we were at ISC West. What a great show for us. Anyway, one of our new partners, XV Asia Technology flew all the way out from Malaysia to see us. They are an exciting company who is aggressively pursuing new video technologies for both entertainment and surveillance. A look at their web site will give you an idea of what they are doing. They are very innovative in their cross-application of technology between various vertical markets.

Anyway, as a result of the visit at ISC West, XV Asia asked us to work with them on pulling together a trade show presence for the Defense Services Asia exhibition which runs April 16-19th in Kuala Lumpur Malaysia. Always up for a challenge we started to organize a booth for displaying the MVE™ and Mobile Video Vault™ solutions.

Along with this, we will also be showing a live streaming video backhaul system for use with the Immersive Video 360 degree camera. XV Asia has already tested this system and are pleased with the results. They have worked hard to make this system a reality. Basically now we can stream using a HauteSpot WRAP router system from the Hipervision camera to a remote viewing station from almost anywhere. Allow live events to add a cool new video element to their web presence.

If you are in KL for the show come by and see us!

More soon....plane is boarding
Posted by Bob Ehlers at 5:29 AM No comments: