Now I can say I personally know a real American hero.

This week is the ISC West 2012 show in Las Vegas. As most of you know, HauteSpot is exhibiting. One of our good customers is Paul Babakitis of PGB Executive Investigations from New York. Just last week I spoke to Paul and he said that he was going to be coming out to Vegas for the show and that he would definitely stop by.

What happened next was all over the news. Paul was on a JetBlue plane from New York to Las Vegas. During the flight the pilot flipped out and wanted to crash the plane. Paul, as a retired NYPD Sergeant leaped into action and helped subdue and restrain the pilot until the flight could safely land.

Paul helped save the lives of all of the passengers on the plane. So today, when Paul actually arrived at our booth at Las Vegas, we all cheered for him and were glad to have our friend, business associate and hero safely arrive at the show. Personally I don't know if I would be getting back on a plane right after an event like this happened.

Paul, everyone at HauteSpot salutes you and your bravery. Now we all know a real hero.
Posted by Bob Ehlers at 12:35 AM No comments:


I am completely exhausted. Today was one of the busiest first days of any trade show we have been to. In our booth we had hundreds of visitors checking out Mobile Video Vault, MVE and HD Witness.

The demonstration network that we set up with a wireless 5GHz link to the Network Optix booth and a wireless 3.65GHz link to the Veracity booth both were up and working flawlessly throughout the entire show. As some of you may know, getting any wireless to work on a trade show floor at all is a challenge. We were achieving full data rates and throughput. This was achieved by running our TDMA like protocol and our frequency flexibility.

Kelvin Chung from SentinelAVE did a great job of configuring the microNVRs and Mobile Video Edge application to use Clear WiMAX to keep a rock solid wireless connection to Los Angeles. Throughout the entire day we ran live demos from our video server in Los Angeles over 4G without any hiccups. Customers were able to view live and recorded video from Los Angeles at high resolution and high frame rate.

After almost being knocked out by a monitor that fell off it's mount, Mark Armstrong of SoleraTec set up Mobile Video Vault microNVR running in our booth and sending archive video every 5 minutes to the Veracity Coldstore server in the Veracity booth over wireless. This too ran well throughout the entire day.

We had no time to go look around the show floor, but judging from the comments from the crowd, we had the coolest new product offerings at the show.

Also, Mike, Max and Aaron did an outstanding job of manning the booth and engaging with customers. They were able to answer most of the questions customers raised, and let myself and Wes handle the more complex questions. The level of professionalism of our staff is something I am very proud of and I know our customers appreciate.

Two more days to go. If you are in Vegas, come by and see us. Booth 9139, way in the back...near the food concession.

Posted by Bob Ehlers at 9:10 PM No comments:

ISC West Preview After a week of futzing with demo set ups, cranking out new marketing material, setting up meetings, and all the rest, we are ready to GO!

I wanted to share with you just a few of the really cool things that we at HauteSpot will be bringing with us to ISC West this year in the hopes that you might find them interesting enough to stop bye and check out. We are in booth 9139 (way in the back...). This year we have made some amazing technological strides, together with our partners in innovation.

One of the first things I hope you will notice is that we have changed our focus from being a "Wireless" solution company to being a "Connectivity" solutions company. We like to think of ourselves as the connective tissue or nervous system linking your extremities (cameras, remote devices, sensors and the like) with your core organs (VMS, Information Management Systems). We have become more technology agnostic, embracing things as LTE, WiMAX, VSAT, White Space and Virtual Private Networks, in addition to our existing 802.11, TDMA and video processing products. Our demonstrations at ISC West reflect these changes. Basically we want to partner with you to take the network beyond the boundaries and limitations that you face today.

MOBILE VIDEO VAULT - Working with our partner SoleraTec, we have built the BLACK BOX of the transportation and public safety industries. The Mobile Video Vault runs on our compact microNVR (you know, the 4"x4"x1", 8 watt, 12 volt, 500 Gigabyte, Dual Core 2 Gigahertz micro computer router), we add the SoleraTec Phoenix RSM software which gathers data from GPS, vehicle diagnostics, audio, lightbars, sirens, etc, along with high definition video, then it watermarks it, locks it up tight for evidence and stores it. When the vehicle gets to a transfer point, HauteSpot high speed wireless transfers it for archiving. All of the data is searchable and cross referenced. Want to know what it looks like to drive a school bus 40 miles an hour over railroad crossings? We can show you? Want to see how hard the brakes were applied and the GPS deceleration record just before that accident, with video, we have that. High definition, small size, low power, all IP.

We will be capturing video in our booth, storing in on the microNVR and transferring over a wireless link across the show floor to the Veracity booth for storage on their ColdStore network storage array.

MVE - Sometimes you need to see what is happening in high quality, fast frame rate, in real time, and you need to do it over the public cellular network, satellite, or other low quality network. Working with our partner SentinelAVE we have built the MVE. Again, using the microNVR platform we built a compact mobile platform that can stream live, rate adaptive, high quality video over the narrowest network pipe. Sentinel's software goes beyond just compression, it is connection aware and creates and keeps persistent links going over 3G, 4G, Satellite or even dial up. In as little at 100kpbs good quality situational awareness video can be used to monitor remote locations.  MVE also monitors location data and stores video for later retrieval.

Watch us link to video coming in from Los Angeles, a Las Vegas parking lot, San Luis Obispo, and from around the ISC West show floor all over 3G and 4G


HD WITNESS - For the most amazing High Definition video surveillance experience, our friends at Network Optix have ported their HD Witness VMS system onto the microNVR as well. This video processing software defines a new standard in the industry for display, transport and ease of use. It is truly stunning how simple it is to use, how quickly it sets up, and how responsive it is on hardware as small as the microNVR. Come by and see us run the HD Witness on a microNVR over wireless links to the Network Optix booth.

Of course we will also be showing our new HauteLINK Virtual Private Network gateway and remote router, our WRAPxXG Gigabit wireless routers, and much more. Our whole HauteSpot pre-sales design team will be on hand to answer any questions you have. So please come by with your design questions. We will be happy to answer them.
This year is shaping up to be a great one and between you, our awesome customers, and our excellent partners we think we have a winning team.
Thank you and I hope to see you soon.
Posted by Bob Ehlers at 12:50 PM 1 comment: 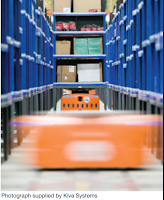 The innovative video system was installed in the Dallas, TX distribution center.  The solution used the HauteWRAP™, a high-performance wireless router, and the HauteSHOT™ microNVR, a compact network video recorder.  The HauteSHOT™
microNVR is among the smallest IP recording devices on the market.  It measures 4x4x1 inches, solely consumes 8 watts, and operates on 12VDC.

“HauteSpot was able to design and provide a world class wireless megapixel video solution,” said Ron Walthall of Firetrol Protection Systems.  “The wireless video signal was transmitted over a completely different frequency so it did not interfere with the customer’s existing WiFi, this made the IT managers happy.”

The video system provides Walgreens’ warehouse personnel with a new level of security and efficiency. The HauteSHOT microNVR allows warehouse employees to safely and remotely monitor the movement of robotic pallet machines within the distribution center using high-definition and real time video streaming.   The operators can determine if malfunctions with the robotic machines warrant manual assistance or can be remotely overridden.  Thus, reducing the number of repair personnel on the warehouse floor and minimizing the liability with machinery.

“The customer has been so impressed with the system, they have asked us to install identical systems at other facilities around the country,” said Walthall.  “I know HauteSpot stands behind their products and have the technical expertise to handle any size wireless video recording situation.”
Posted by Bob Ehlers at 9:55 PM 1 comment:

Ano Nuevo
About 5 years ago we helped the California State Park at Ano Nuevo install a live 2 mega pixel wireless web camera on the elephant seal rookery island about 1/2 mile off the coast. The camera is a PTZ and was linked to the visitors center using a 5GHz link. At the visitor center, rangers could steer the camera and display the images of bulls fighting, cows giving birth, and pups playing on the beach all in HD to the visitors.

The visitors center was linked to the outside world over a fairly unreliable T-1 (that is 1.544Mbps) and the camera used MJPEG, so the bandwidth was just not sufficient for good web browsing. The techs with the Parks were able to transcode the video down to QCIF and slow frame rate and get it on their web page here http://parks.ca.gov/?page_id=25732 .

Everything was good until about 4 months ago when a pelican built its nest on top of our parabolic antenna. The nest pushed the antenna out of alignment and now the video is only available when the tide is in the perfect level where the signal reflects off the water at just the right angle.

At some point the biologists will allow the techs to fix the antenna, once the pelican chicks are hatched.

So about 9 months ago I was up at Piedras Blancas, just north of San Simeon, watching the elephant seals there, which I think put on a much more interesting show. You can get much closer to the animals and there seem to be many more of them.

While I was there I had a conversation with one of the docents about installing a solar powered camera along the beach. After going back and fourth over design for several months and working through budgeting, the State was able to pull together a project to install the system. Last week that project was commissioned.

The link runs from the beach about 1.5 miles up to the old lighthouse where there is a T-1. The system uses a pair of HauteSpot WRAPSTATION LX units and is completely solar powered. 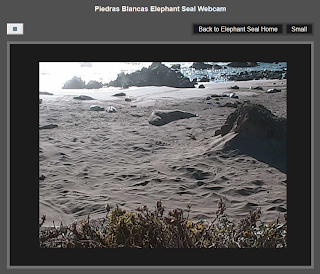