Then came last week's Baltimore Grand Prix. GER deployed 6 eWRAPs along the race course. They powered them on at 7am on Friday morning and powered them off at 6pm on Sunday night. During the course of the event over 150 people received medical treatment and had their status tracked using HC Standard and the eWRAP. "Total success."

The story in the Baltimore Sun tells all about the event.  Suffice to say we were happy with the performance, particularly given the challenges of RF noise, changing reflection, heat and moisture. The eWRAP was a real trooper.

And now, over the past 3 days, Harford County MD had tremendous flooding, and GER was on the job again, with HC Standard and the eWRAP helping track the evacuation of 158 senior citizens from threatened nursing homes. Again, "everyone was ecstatic about the systems."

Over the past month, we have hundreds of hours of actual powered on use of the eWRAP and HC Standard in real disasters, with real lives at risk and real success.

We did learn a few things that we are now cooking into the eWRAP and HC Standard system. One of the most critical functions we added recently is central network health monitoring. Using a highly redundant  hosted server provider, we set up our HauteSpot Network Manager (HSNM) which monitors proactively every eWRAP system. We watch all facets of the system including CPU, IO, service status, connect time and more. Each eWRAP pushes log events to the HSNM server so we have a running record of all events on every device, so if there is a failure, we have a history to review. 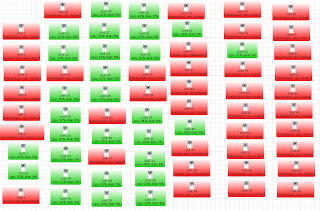 HSNM also monitors each device by polling. Every eWRAP registers with the HSNM server and we have it's dynamic IP address being pushed, so we know when we last heard from each unit and what its condition was.

The next step for monitoring is to add carrier monitoring such as Verizon, ATT and Sprint, so we can get even more detail about system status. 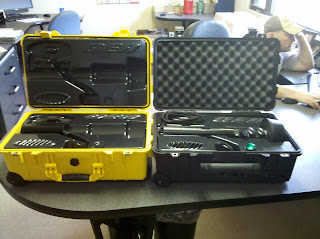 We also ran some burn in tests. Connectivity Solutions Inc. in Sterling VA is our partner who builds the eWRAP into a rapid deployment kit. With the batteries that they provided in the kit, the eWRAP will run for 2 days (48 hours), without a recharge.

We also have been load testing the eWRAP with connections for hand held WiFi devices such as PDA, netbooks and the like. We have had over 100 active connections without any issues.

The eWRAP is a light weight, easy to deploy, weather proof, self contained communication platform. Just carry it to the scene, turn is on, and you are up.

With every incident we are improving the system performance, reliability, and management. The eWRAP is already the most reliable, most flexible, and easy to use communications platform there is.