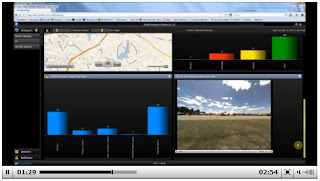 Here is a short video sample showing HC Standard with live video being fed via 3G wireless over a eWRAP router.

In the case of Volk Field in Wisconsin we were 15 miles from the nearest Verizon tower. Despite this, for much of the exercise we were streaming VGA resolution video at 10fps back to the Internet. In the case of Meridian Mississippi, the cell tower was closer and we had a rock solid connection throughout the entire exercise. 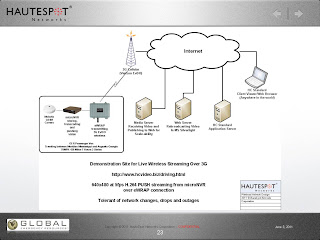 The trick to reliable video from these remote sites was HauteSpots microNVR combined with the eWRAP. The microNVR provided on location recording of the video from a Moboix 3 megapixel camera at full resolution and frame rate. The microNVR also transcoded the video into a VGA resolution stream and then pushed it to a media server that HauteSpot set up for the exercise. The eWRAP provided a reliable connection back to the Internet that survived the "ups and downs" of the cellular network. The media server rebroadcast the video so that hundreds or even thousands of simultaneous viewers could watch the video.

What was really amazing was the trip home from Meridian MS. The GER team that was working at the Meridian site packed up at the end of the exercise to travel back to Augusta GA. They left the microNVR and eWRAP connected to the van power system while they drove.  The trip was over 400 miles and took over 7 hours.  Throughout the entire trip VGA resolution video streamed from the van over the 3G network at 10fps with no outages during the entire trip. Take a look (click to launch): 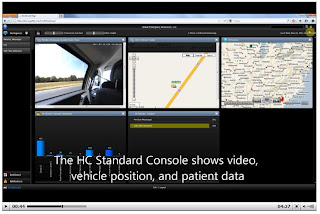 I recorded the video from the van throughout the entire trip home on my laptop computer in California over an cable Internet connection.

What does this all show? That even at 3G speeds of 50-150kbps, good quality VGA video is possible from moving vehicles if you architect your transmission application appropriately.

We are now looking at how to productize the media server architecture for reliable streaming. Watch for more soon.