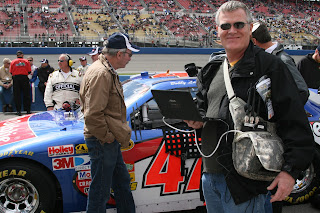 Last Sunday I went to the races with Tom Zeeman from MicroPower. As chronicled in last weeks blog, we were there to get an idea of how to make wearable wireless video work in this challenging environment.

We walked the entire raceway from the pits, to the garage, to the grandstands. Throughout the walk through we recorded all of the wifi traffic and spectrum analysis.

What we found was that NASCAR is very dependent on wireless. There were 43 teams, each had some radios for voice communications, a backhaul data link to the trailer from the pit. Satellite downlinks and terrestrial rebroadcast to many monitoring stations was common. Wifi was used for cameras and telemetry, although surprisingly infrequently. 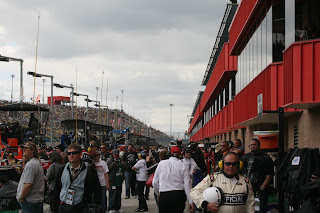 It is very noisy, both in the audible range and in the RF range. We found that most of the teams had given up on wireless video from wearable cameras. There were two teams that had something that worked, but pretty much everyone else had given up on it. We found over 150 SSIDs being broadcast from almost 280 APs. That was just the 2.4GHz band. Then go up to 5GHz and we found another 60 SSIDs.

The photo on the right is a great example of what you see in the pits. Look at all of those hot sticks with antennas on top of them. Every one has an AP.

The upshot of all of this is that wireless is a challenge. But we have a plan. Of course I cannot tell you here how we are going to overcome the noise and make the Mini-i work. Suffice to say we are expecting that within this race season you will see MicroPower cameras on one or more teams. Look for our stickers, hats and jackets coming soon...